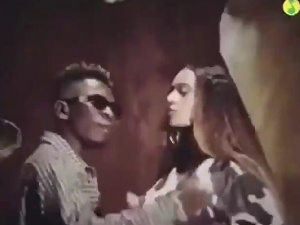 play videoShatta Wale and Beyonce in the leaked video

The music video of American singer Beyoncé featuring Ghana’ Dancehall king, Shatta Wale has reportedly been leaked on the internet.

The yet to be released official video of the ‘Already’ song found its way unto the internet after it was hacked by some IT group alleged to be in China.

In the much anticipated-video, Shatta Wale is seen with the American celebrated singer in the same space, jamming and singing to the song.

The “I know my level” hit maker became a laughing stock to Ghanaians when he revealed early this year that he had already shot the video with the wife of Jay Z.

Charles Nii Armah Mensah as he’s originally known has now become the hero of the day after the video leaked with hundreds of people jumping unto social media to congratulate his exploits in the music industry.

Beyonce’s ‘Already’ track featuring Shatta Wale was released in July 23, 2019, a year ago on the ‘Lion King Album. The song has earned over 12 million views on Youtube

I know I don’t respect

I am a disrespectful person and I know that

Government doesn’t regard celebrities, they only care about us during elections – Lilwin

EndSARS: Allow those who care to speak