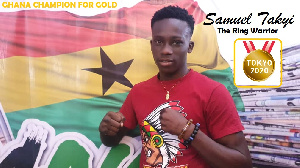 Samuel Takyi will compete at the Olympic games

The 19-year-old amateur boxer secured a place at the rescheduled Olympics games after he defeated Uganda’s Isaac Masembe at the Olympics African Qualifiers in Senegal earlier this year.

Since the inception of the Olympics in 1952, Ghana is yet to win a gold medal in any sport and has won only 4 medals (1 silver and 3 bronze). All the medals except 1 were won by boxers.

Clement Quartey won Silver at the 1960 Olympics in Rome, Eddie Blay won Bronze in Tokyo 1964, Prince Amartey as well won bronze in Munich 1972. The other medal was won by Ghana’s soccer team in 1992.

The featherweight boxer is aware of these records and has vowed to win Ghana’s first gold medal in the competition.

“I’m going to Tokyo to improve myself and I have already told Ghana I’m going to bring the gold home, we haven’t won a gold medal at the Olympics and I’m going to do this,” he told Enoch Adadevoh on KFM TV.

“I want to tell the President, Nana Addo Dankwah Akufo Addo and every big person involved to help us so we can prepare well and bring the medals to Ghana.

“And to every single Ghanaian, pray for me, I know this is my first time going to the Olympic games and I’m not going to Tokyo to joke, I’m going to bring the medal home,” Samuel added.

When quizzed whether the postponement of the Olympics from July 2020 to July 2021 due to Covid-19 has affected his preparations, he stated that it is a blessing rather than a curse for him.

“Yes, I think it is good for me because I’ll get to train more and prepare well for the Olympics.”

The young boxer is one of two Ghanaian boxers who will be representing Ghana at the 2021 Olympics in Tokyo. The other boxer is Suleman Tetteh, a flyweight boxer.

He made special mention of his publicist and media promoter, Mr. Sammy Heywood Okine aka ‘General One’ as well as the management and technical staff of the Ghana Amateur Boxing Federation

GPL: Kotoko go one point behind leaders after Dwarfs victory

CHAN 2020: Zambia off to flying start with Tanzania win

Coronavirus: Up to fifth of UK workers ‘could be off sick...

I’ll say and say it again that Beyoncé never shot the...