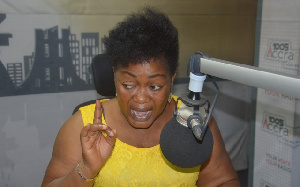 Kumawood Actress Christiana Awuni has stated, that her last words to the Late Bishop Benard Nyarko before his casket was closed is to strike her dead if indeed she is responsible for his death.

This follows an earlier claim by Bishop Nyarko’s mother stating that Miss Awuni was responsible for her son’s death.

The actress who seemed devastated about the allegation said while filing past Bishop’s body, she called his real name and told him to take her life if truly she (Christiana Awuni) killed him.

“When I stood by his body I said Kwame Nyarko if indeed I killed you, kill me the same way. Don’t let me live long. I cannot even create a human being, why kill one? Judgement is there for everybody. After death lies judgement so why will I kill a human being,” she told AccraFM’s Nana Romeo.

Nonetheless, the avalanche of rumours that has engulfed the death of the Kumawood actor, Bishop Bernard Nyarko was felt on the Ghanaian social media.

From claims that he was neglected by his Kumawood colleagues while on admission at the hospital to pointing fingers at some particular people saying they were responsible for Bishop’s death, it has indeed been a stressful journey until he was buried and even after.

Watch the video below

Our current management is way better than George Britton – Keche

I will be back on the music scene soon – Okomfour...

Did you snatch my mic because I’m a Somanya-based artiste?