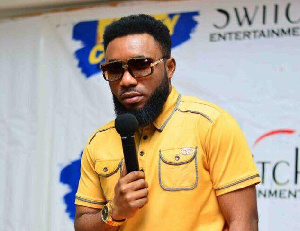 Stand-up comedian, Nino, who has kept his comedy robe locked away in a closet for so long, hidden from Ghanaians, is now back and has asserted that he is not into comedy for the fame, hence he does not regret going MIA.

In an interview with Foster Romanus on eTV Ghana’s ‘Late Nite Celebrity Show’, he stated that to him, comedy is about entertaining the mass and not about gaining popularity, therefore he does not regret staying off the comedy scene for all these years, despite the fact that it cost him the chance for popularity.

He said, “I got to the point where my name was almost out there but due to one or two circumstances, I had to lay back a bit and honestly, I haven’t regretted that because one thing is, I don’t perform to be popular. Popularity is out. I don’t want it. I just want to entertain.”

According to him, if it was all about popularity, then there are many other things that he can do to be and to remain popular. “I think that as humans, sometimes we need to take some time off certain things and be laid back so that we can analyze one or two things”, he noted.

Nino mentioned that he only decided to give comedy a break because he felt he needed to be refreshed and during that period, he got time to pile up a lot of ideas to serve Ghanaians with, therefore, it does not matter if he has been consistent or not.

“Right now, I’m really ready to work and I have done a few performances already since I resumed, so I think the sky is the starting point and the future is bright. All that matters is that at the end of the day, I’m in to entertain Ghanaians”.

The tale of a female trotro mate

Kwabena Kwabena will be a prophet