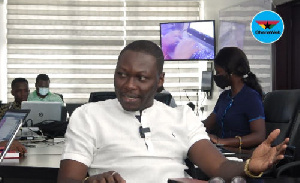 Entertainment pundit Arnold Asamoah-Baidoo says he cannot understand all the brouhaha about the Kumerica ‘movement’ that has seen a lot of condemnation from a section of industry players.

According to him, the ongoing confusion surrounding the Kumrica wave that has taken over the country.

Arnold who couldn’t hide his admiration for the group who started the whole Kumerica movement, congratulated them for the energy they exhibited.

Speaking on Entertainment Review programme on Peace FM, the Entertainment Writer and critic said he feels the confusion over their brand and originality is exaggerated by the industry players especially knowing the kind of industry that exist in Ghana.

He said the Ghana music industry thrives on hype, trend, wave and that is exactly what the Kumerica movement is enjoying.

Arnold believes the likes of Wei Ye Oteng and others who keep criticizing the Kumerica wave is just making a mountain out of a molehill, and advised them to allow the boys to enjoy their moment.

“For me, I like their energy, they are full of excitement. I feel this is their moment and so I am wondering why anybody would knock their hustle…I feel some way that people are trying so hard to prevent them from having their time. I can understand where Oteng and the rest are coming from with the issue of originality etc..but I think people are exaggerating what is going on”, he said

He continued: “ If you understand the industry we have, everybody is striving for attention, again this industry is all about hype…they spoke about their willingness to do music a long time ago and through this movement, they are here. You should understand that what is happening now is a wave, a trend, it will pass, and in as much as I understand where Oteng and the rest are coming from, I am also wondering why they are bothering themselves so much over this wave that will fade off…”

Beat producer and the CEO of Drum Lyne Music, Wei Ye Oteng, came under backlash on social media indicated that the trend surrounding the popular Kumerica mantra would soon die off because it was not carefully thought through.

Wei Ye Oteng said the Kumerica trend could have survived and stayed longer than usual if the originators had made it more about themselves. He added that the confusion that had come to be attached to the trend was rather going to be its undoing. He claimed there were oo many variations associateded with the Kumerica wave and there was no originality.

Wei Ye Oteng’s post read: “Kumerica has no future. It’s dead on arrival because it was never thought through. We could have done it better by projecting us and not confusing ourselves. Confused boys”.

His post didn’t go down well with some social media users and Kumawood actors, prompting actor Bernard Aduse Poku to respond angrily telling him to shut up if he had nothing important to say.

He replied in a post on Facebook saying; “If you got nothing positive to say about this whole Kumerica wave, SYBAFMU!!! You mean NOTHING to the wave!!”

Watch Arnold make his submission below:

I know I don’t respect

I am a disrespectful person and I know that

Government doesn’t regard celebrities, they only care about us during elections – Lilwin

EndSARS: Allow those who care to speak