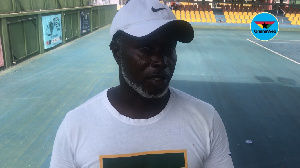 This year’s edition, which is being staged at the Accra Sports Stadium tennis arena is the 7th edition of the championship.

The event which is expected to last over the next two weeks will see tennis players from different age categories fine-tuning their craft and also fighting for laurels as well as a place in the Africa Junior Championship Tennis team.

In the seniors’ division, both male and female tennis players will get an opportunity to improve their rankings based on how they perform during this competition.

Speaking to pressman on the first day of the championship, Mr Richard Ayi Dartey who is in charge of Tennis Development at the McDan Foundation said, this event is a pre-cursor to a bigger event later in the year.

He said, after the rampaging effects of the Coronavirus on the sport and players, his outfit thought it wise to put together this event so that players can get back into shape before major tournaments.

“Covid-19 didn’t allow us to do a lot of things on schedule but now things are getting better so we agreed to organize this so that the players can practice and get into shape. The first week is for men and ladies and the second week is for juniors.”

Mr Dartey also revealed that the reception on the first day has been impressive and he would be expecting keener games as the days go by.

He also revealed that there will be exciting rewards for those who excel in the event.

The grand finale will come off on October 31.

Lewandowski, Messi, Ronaldo and Salah among FIFA The Best