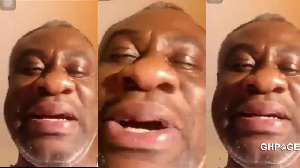 On November 23, 2020, a video went viral across social media that sees a man believed to be in his early 50’s crying over a broken heart.

From the video, the old man begged his sweetheart, Akua Afriyie, to come back to him after she dumped him.

According to the man, he’s tired of life as his Akua has broken his heart however he still loves her.

Apparently, someone close to him has snitched on him spreading lies about him to Akua, his sweetheart hence she calling off the relationship.

“Akua I’ve been shedding tears all day. You know I still love you. All that they are saying is not true, I’m not like that Akua Afriyie. Akua I can’t sleep, eat, I can’t do anything.” the old man said in the video.

The man in the video has broken silence on what made him cry and how the video surfaced on the internet after it went viral.

The US-based Ghanaian man in an interview with Kofi Adoma on Kofi TV, revealed that the video was mistakenly sent to a friend on WhatsApp when he tried sending to Akua and this friend also leaked it online just to disgrace him.

The man who chose to grant the interview under strict anonymity said the viral video was recorded about 8 years ago when he was in a relationship with his estranged girlfriend, Akua Afriyie.

Per the man’s intelligence, this particular video was made with the aim of getting back to Akua, thus; she would pardon him and come back to him to live happily once again if he sees him crying, but that never came to fruition.

Having said that, the man told Kofi Adoma that he has moved on as that phase of his life that brought him pain and sorrows has passed. He has now moved on and happier now.

Ghana is not HIPC; past economic mismanagement behind us – Finance...